Latimer is the southernmost end of the western ridge that defines the Quiambaug Valley - though that ridge splinters in many ways, and ends in a variety of small hills and inlets.  It now has a facebook page: https://www.facebook.com/pages/The-Official-Latimer-Point-Facebook-Page/171381792927799

It was originally known as Noyes Neck, before about 1930.  A Capt. John Green had a kettle works at Noyes Neck (Carol Kimball article, Sept. 12, 2005)

Latimer Point was home to the Wilcox Fertilizer Factory, as described above by Ellery Thompson.  The smell was so bad that Stonington passed an ordinance prohibiting the plat from operating when the wind was blowing onshore.  "eau de menhaden".  The factory closed in 1935 when Menhaden stocks ran low.

The (overlapping) photos below are from Jeff Wilcox - one shows the factory from the side, showing its full size; the other is a modern one, from a slightly different position, and not covering the complete vista; nevertheless it makes clear where the factory was, and gives some sense of its size.  As you can see from the modern photo, you're looking across the marshland connector between Andrews Island (on the right) and Dodges Island (on the left).  In the distance you can see Enders Island (in the old photo there is no causeway). 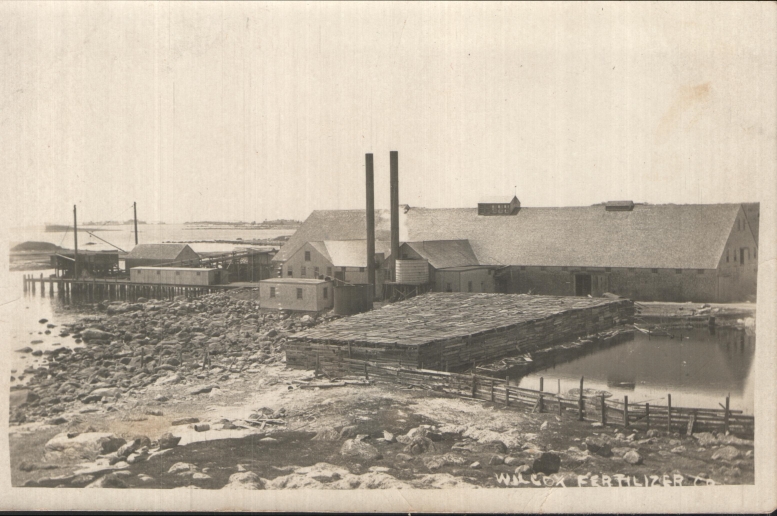 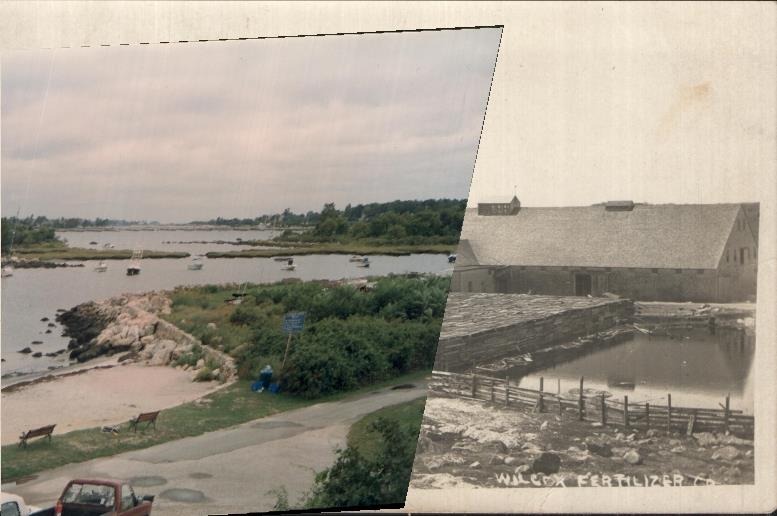 A 1934 aerial image give a better sense of the factory's footprint - if you'd like to see a larger version, just click on the image: 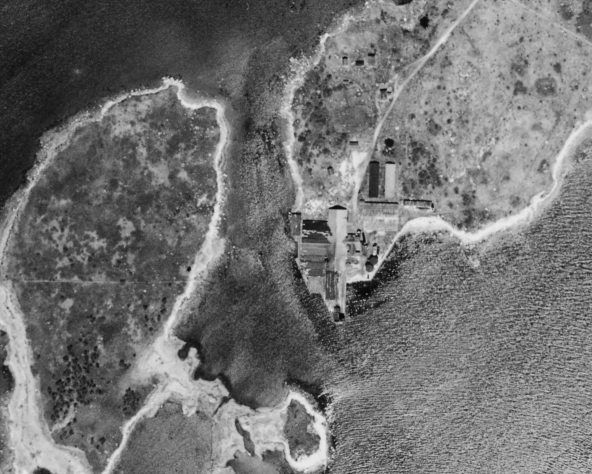 Rather than do another fading image, I'm making this Google Earth overlay available: LatimerPoint1934Overlay.kmz.  To use it, make sure you have the (free) Google Earth (http://www.google.com/earth/ for an overview, http://www.google.com/earth/download/ge/agree.html to begin the download).  Once it's installed, click on the link above (or save it to a local disk and just click on it.)  Google Earth will bring up a window showing the image above aligned over current aerial imagery.  Google Earth has a pane to the left which will show the overlay; if you right-click on that and select "Properties", you'll get a small window that will have a slider for "opacity".  Using that you can make the overlap as transparent as you like, which will show the current imagery underlying the old photo.

The main thing that becomes noticeable is how far to the south (out into the water) the factory extended compared to the land that's there now.  From the fading photo above it looks as if much of this was built out on pilings, not on land.

Here are six other photos from Jeff Wilcox - these include the only two known photos of the interior of the factory:

There is an article I have yet to locate: "Bony-fish: the Menhaden Fishery at Mystic, Connecticut", Log of Mystic Seaport, Spring 1981.

Here is a photo of one of the Wilcox Menhaden boats, the "Leander Wilcox":

A newspaper article of May 5, 1939 announced that the Wilcox Company would begin renting lots; the article mentions that the area was once known as Neck Farm, consists of 50 acres; each lot would rent out at from between $55 to $95 per year, offered for a five-year term. The two story building which was the old Fish Works was to be remodeled as a Community House.

When Bluff Point lost its cottages after the '38 hurricane, a number of summer residents moved to Latimer Point.  Fenner was in charge of early development. Cottage fragments were moved by barge.

There were two oil tanks on waterfront - tankers would unload.  Chimney of Wilcox factory taken down in 1942.  Hinchey family of Norwich brought their cottage from Bluff Point.  The Adams cottage had some of a Bluff Point cottage, as did George Dexter's and the Caswells.  Haywoods bought an existing barn and renovated it, Weeks family from Storrs bought an existing cottach.  The Goodrich family renovated another.  An old farmhouse, said to have once been a rooming house, was used as a community house.

In 1910 a 2-inch water line was constructed to bring fresh water to the point ("Bluff Pt. to Latimer Pt.")

John Bindloss took over the property, after WWII (1942 according to "Bluff Pt. to Latimer Pt.")